There aren't that many of you, so thanks to those who took the time to come.

I've been wondering what I can do to make this more interesting. Looking at the stats, it does appear that meta-topics are most popular: 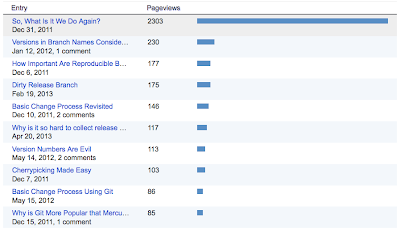 That is interesting, since I would have thought that more detailed "how to" articles would be better.

Another thing I wonder about is the lack of direct response. Partly, that's because there just aren't that many folks interested in the topic, but maybe it's also the presentation.

I find that the most difficult part of my job isn't the technical aspect, it's the communication aspect. I often oscillate between saying things that are obvious and trivial, and saying things that have more controversy hidden that it appears at first, and people often only realize at implementation time what the ultimate effect of a choice is.

An important motivation for this blog is to practice finding the right level, so feedback is always appreciated.