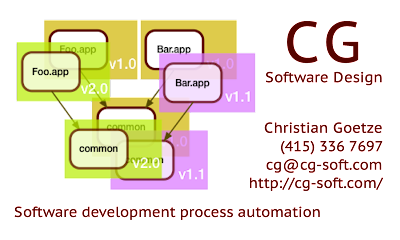 I'll be reviving http://cg-soft.com and also getting new business cards.

Email ThisBlogThis!Share to TwitterShare to FacebookShare to Pinterest
Labels: Housekeeping

I got the #AutoAwesome treatment

Google has something called #autoawesome, which looks at everything you upload and figures out something in common.

In this case it combined my graphics from  the previous post into an animated gif. It worked out quite nicely:

Email ThisBlogThis!Share to TwitterShare to FacebookShare to Pinterest
Labels: Housekeeping

In our business, the term "environment" is rather overloaded. It's used in so many contexts that just defining what an environment is can be challenging. Let's try to feel out the shape...

We are in business providing some sort of service. We write software to implement pieces of the service we're offering. This software needs to run someplace. That someplace is the environment.

In traditional shrink wrap software, the environment was often the user's desktop, or the enterprise's data center. The challenge then was to make our software be as robust as possible in hostile environments over which we had little control.

The next step on the evolutionary ladder was the appliance. Something we could control to some extent, but it still ends up sitting on a location and in a network outside our control.

The final step is software as a service, where we control all aspects of the hosts running our applications. 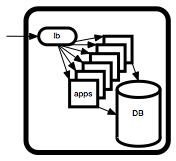 From a build and release perspective, what matters is what we can control. So it makes sense to define an environment as a set of hardware and software assembled for the purpose of running our applications and services.

So an environment is essentially:

When we develop new versions of our software, we would like to test it someplace before we inflict it on paying customers. One way to do that is the create environments in which the new version can be deployed and tested.

A big concern is how faithfully our testing environment will emulate the actual production environment. In practice, the answer varies wildly.

In the shrink wrap world, it is common to maintain a whole bank of machines and environments, hopefully replicating the majority of the setups used by our customers.

In the software as a service world, the issue is how well we can emulate our own production environment. For large scale popular services, this can be very expensive to do. There are also issues around replicating the data. Often, regulatory requirements and even common sense security requirements preclude making a direct copy of personally identifiable data.

This being said, modern virtualization and volume management addresses many of the issues encountered when attempting to duplicate environments. It's still not easy, but it is a lot easier than it used to be.

If you have the budget, it is very worthwhile to automate the creation of new environments as clones of existing ones at will. If you can at least achieve this for 5-7 environments, you can adopt an iterative refinement process, very similar to the way you manage code in version control systems.

We start by cloning our existing production environment to create a new release candidate environment. This one will evolve to become our next release.

To update a set of apps, we first again clone the release candidate environment, creating a sandbox environment to test both the deploy process and the resulting functionality.

Then, we deploy one or more updated applications, freshly built from our continuous build service (aka Jenkins, TeamCity, or other).

The technical details on how the deploy happens are important, but not the central point here. I first want to highlight the workflow.


Now, let's suppose a different group is working on a different set of apps at the same time. 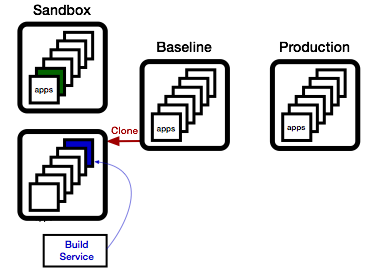 They will want to do the same: create their own sandbox environment by cloning the release candidate environment, then adding their new apps to it.

Meanwhile, QA has been busy, and the green app has been found worthy. As a consequence, we promote the sandbox environment to the release candidate environment. 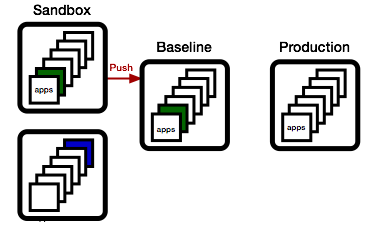 Now, if the blue team wishes to promote their changes, they first need to sync up. They do this by updating their sandbox with all apps in the baseline that are newer than the apps they have. 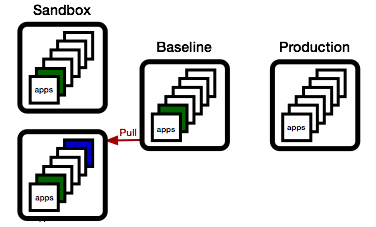 ... and if things work out, they can then promote their state to the baseline. 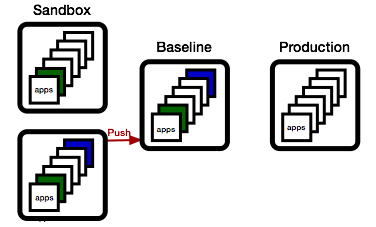 ... and if the baseline meets the release criteria, we push to production. 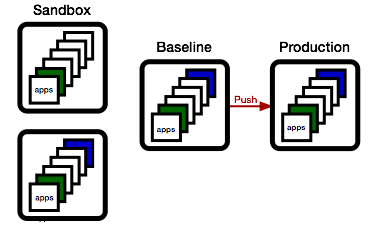 Note that at this point, the baseline matches production, and we can start the next cycle, just as described above.

This process should feel very familiar. It's nothing else but the basic change process as we know it from version control systems, just applied to environments: