Slowly, we're getting our pieces together. In Cherrypicking Made Easy, I explained how there really is only one code branch Release Management should care about:  the production state.

The only way the production state (main) branch can get updated is copying in code, after the artifacts built from that code have been successfully released into production.

Most other artifacts will be non-releasable, and I'll call those development artifacts.

Whenever a new version of an artifact is built, any preceding builds from the same branch need to be demoted to development artifact status. 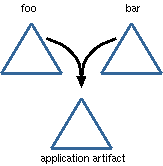 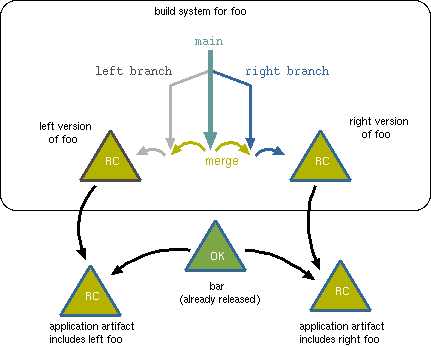 Both release candidates are presented to QA and product management, and let's assume the "right" artifact is selected for release. We promote all the artifacts contributing to the release candidate to the "Released" state, and perform the copy merge in their respective source trees: 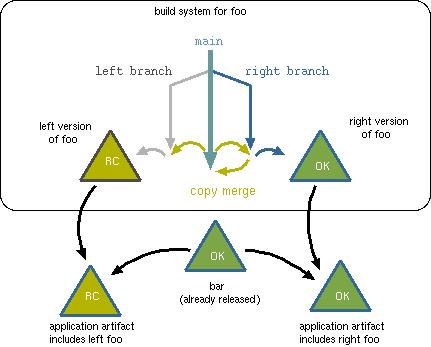 Now that there is a new revision on the main branch, the left version of foo no longer qualifies as a release candidate, and therefore we demote the artifact to development status. Note how this demotion needs to be propagated through the dependency chain to ensure that all artifacts depending on the left version of foo are also demoted: 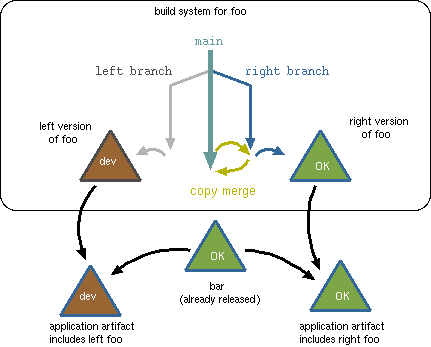 At this point, we have the skeleton of a good release process:
From here on, it's mainly decoration. Good decoration is crucial, though, since it is the only way for people to actually understand the process and make sensible decisions about what a release candidate contains and which one to release.