Why is it so hard to collect release notes (part II)

I've written before about this subject. It turns out that in practice it is quite difficult to precisely list all changes made to large scale piece of software, even with all the trappings of modern revision control systems available. 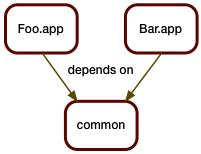 To demonstrate the challenges involved with modern "agile" processes, let's take a relatively simple scenario: two applications or services, each depending on a piece of shared code.

In the good old days, this was somewhat of a no-brainer.  All pieces would live in the same source tree, and be built together. 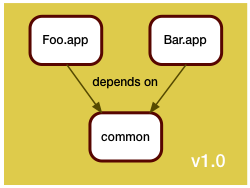 A single version control repository would be used, and a release consists of all components, built once.

A new release consists of rebuilding all pieces and delivering them as a unit.  So finding the difference between two releases was a pure version control system operation, and no additional thinking was required. 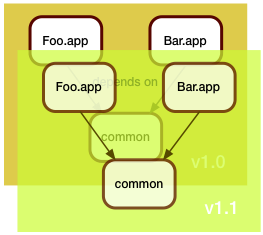 The challenge in the bad old days was that every single one of your customers probably had a different version of your system, and was both demanding in fixing their bugs, but refusing to upgrade to your latest release. Therefore you had to manage lots of patch branches.

Still, everything was within the confines of a single version control repository, and figuring out the deltas between two releases was essentially running:

In the software as a service model, you don't have the patching problem. Instead, you have the challenge of getting your fixes out to production as fast and as safely as possible. 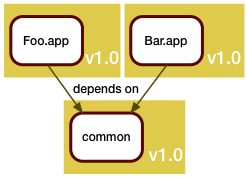 The mantra here is: if it ain't broke, don't fix it. As we've seen before, rebuilding and re-releasing an unchanged component already can have risks, and forcing a working component to be rebuilt because of unrelated changes will at least cause delay.

So, to support the new world, we split our single version control repository into separate repositories, one for each component. The components get built separately, and can be released separately. 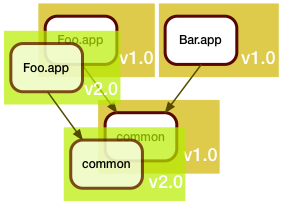 In this example, Foo.app got updated. This update unfortunately also required a fix to the shared code library. Arguably, Bar.app should be rebuilt to see if the fix broke it, but we are in a hurry (when are we ever not in a hurry?), and since Bar.app is functioning fine as is, we don't rebuild it. We just leave it alone.

As we deploy this to production, we realize we now have two different versions of common there.

That in itself is usually not a problem if we build things right, for example by using "assemblies", using static linking, or just paying attention to the load paths.

But with this new process, answering the question of "What's new in production?" is no longer a simple version control operation. For one, there isn't a single repository anymore - and then the answer depends on the service or application you're examining.

In this case, the answer would be:

In order to divine this somehow, we need to register the exact revisions used for every piece of the build. I personally like build manifests embedded someplace in the deliverable items. These build manifests would include all the dependency information, and would look somewhat like this:

The same idea can be used to describe the state of a complete release. We just aggregate all the build manifests into a larger one: 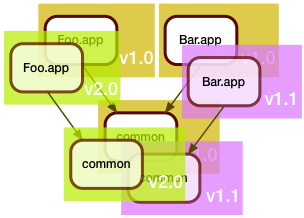 Now the development team around Bar.app wasn't idle during all this time, and they also came up with some changes. They too needed to update the shared code in common.

Of course, they also were in a hurry, and even though they saw that the Foo.app folks were busy tweaking the shared code, they decided that a merge was too risky for their schedule, and instead branched the common code for their own use.

When they got it all working, the manifest of the February release looked like this:

It should be easy to see how recursive traversal of both build manifests will yield the answer to the question "What changed between January and February?": 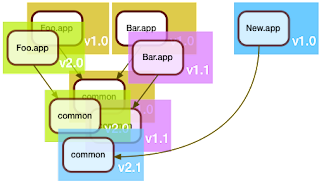 So far, this wasn't so difficult.  Where things get interesting is when a brand new service comes into play.

Here, the folks who developed New.app decided that they will be good citizens and merge the shared code in common. "Might as well", they thought, "someone's gotta deal with the tech debt".

Of course, the folks maintaining Foo.app and Bar.app would have none of it: "if it ain't broke, don't fix it", they said, and so the March release looked like this:

So, what changed between February and March?

The first part of the answer is easy. Since New.app's repository is brand new, it only makes sense to include all changes.

One can make a reasonable argument that from the point of view of New.app, all the changes in common are also new,  so they should be listed. In practice, though, this could be a huge list, and wouldn't really be that useful, as most changes would be completely unrelated to New.app, and also would be unrelated to anything within the new release. We need something better.

But how do we code this?

A single recursive traversal of the build manifests is no longer enough. We need to make two passes.

The second pass processes the new items, now using the revision ranges accumulated in the first pass to generate the appropriate git log commands for all the dependencies of each new item.

This method seems to work right in all the corner cases:
I think this method produces reliable changeset information, and allows me to use git commit comments as the primary source of truth on what actually changed. Combining this with conventions to include issue tracker references in git commits, and hooks to validate the references will go a long way towards automating the release process.